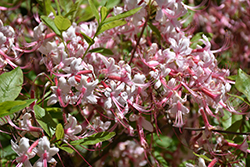 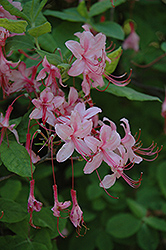 A native species azalea that produces showy clusters of soft pink flowers in early spring before the leaves emerge, tends to spread; absolutely must have well-drained, highly acidic and organic soil, use plenty of peat moss when planting

Pinxterbloom Azalea is blanketed in stunning clusters of lightly-scented shell pink trumpet-shaped flowers at the ends of the branches in early spring, which emerge from distinctive pink flower buds before the leaves. It has green foliage throughout the season. The narrow leaves turn an outstanding purple in the fall. The fruit is not ornamentally significant.

Pinxterbloom Azalea is an open multi-stemmed deciduous shrub with a more or less rounded form. Its relatively coarse texture can be used to stand it apart from other landscape plants with finer foliage.

This shrub will require occasional maintenance and upkeep, and should only be pruned after flowering to avoid removing any of the current season's flowers. Gardeners should be aware of the following characteristic(s) that may warrant special consideration;

Pinxterbloom Azalea is recommended for the following landscape applications;

Pinxterbloom Azalea will grow to be about 5 feet tall at maturity, with a spread of 6 feet. It tends to be a little leggy, with a typical clearance of 1 foot from the ground, and is suitable for planting under power lines. It grows at a slow rate, and under ideal conditions can be expected to live for 40 years or more.

This shrub does best in full sun to partial shade. It requires an evenly moist well-drained soil for optimal growth, but will die in standing water. It is very fussy about its soil conditions and must have rich, acidic soils to ensure success, and is subject to chlorosis (yellowing) of the leaves in alkaline soils. It is somewhat tolerant of urban pollution, and will benefit from being planted in a relatively sheltered location. Consider applying a thick mulch around the root zone in winter to protect it in exposed locations or colder microclimates. This species is native to parts of North America.